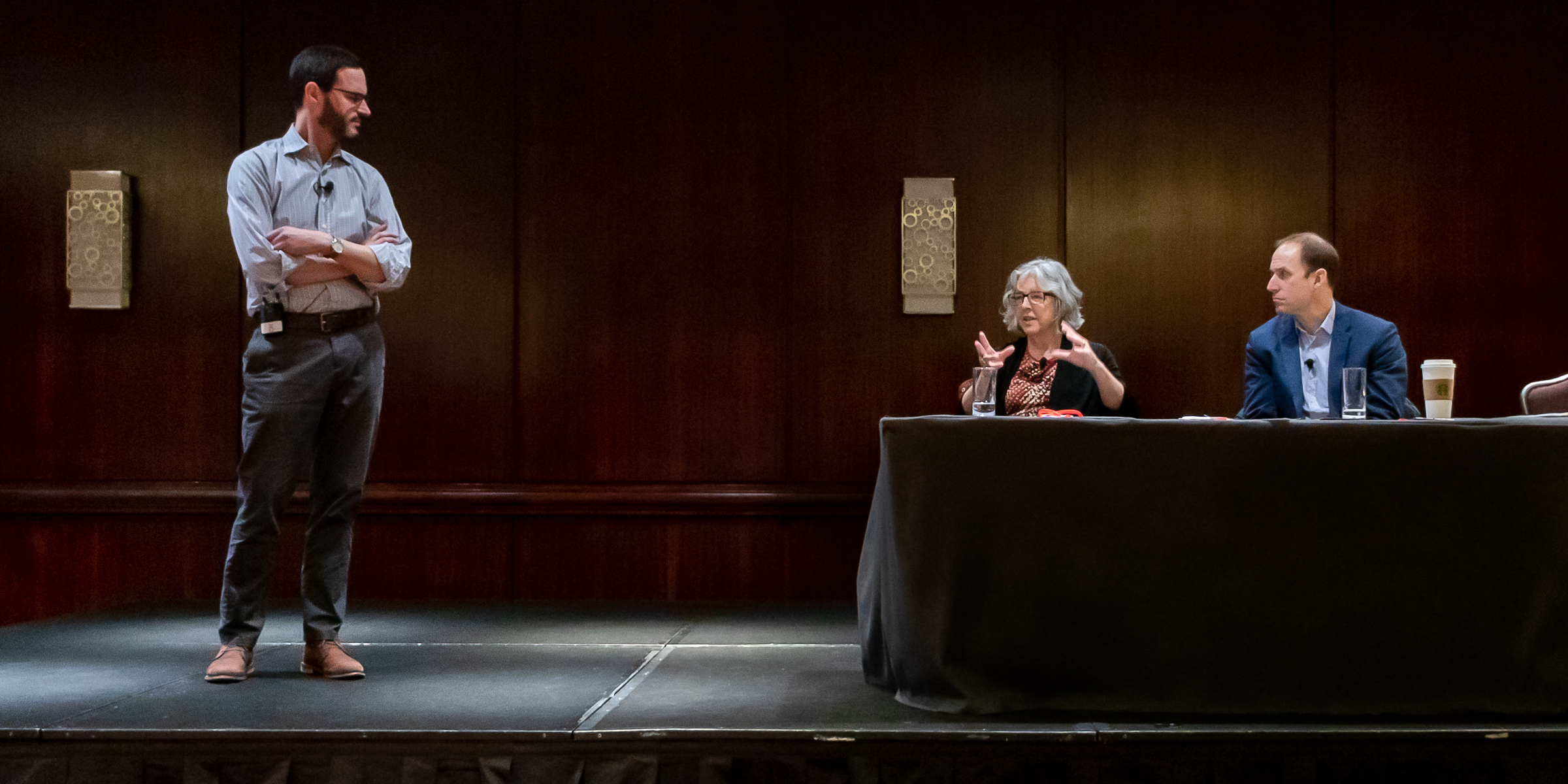 (From left to right) Evan Weissman, Elisabeth Barnett, and Alexander Mayer during a CAPR presentation at the League for Innovation in the Community College’s annual conference.

One goal of CAPR is to provide solid evidence about developmental education reforms that colleges and states have been developing for several years. Math pathways and multiple measures—the subjects of two of our major random-assignment studies—are now relatively mature reforms. Several states have adopted versions of math pathways and multiple measures, and colleges are working out the challenges that come with implementing them at scale.

But there are many other promising developmental education reforms, several of which were also discussed at the League for Innovation in the Community College’s annual conference in February in New York City, both by CAPR researchers representing their home organizations (CCRC and MDRC) and by others from across the country. Some or all of these reforms are likely to be part of a broader approach to meeting the needs of underprepared students.

As Uri Treisman said in his keynote address, even in the best developmental education reform models, about a third of students fail. Treisman, who leads one of the major math pathways organizations at the Charles A. Dana Center at The University of Texas at Austin, said that figuring out how to serve these students is “going to take a Manhattan Project.”

But projects such as CUNY Start at the City University of New York give reason for optimism. CUNY Start is an intensive one-semester program focusing on reading, writing, and math accompanied by wraparound supports. Students spend 25 hours a week in class, where the highly structured, hands-on curriculum is designed to get them actively involved in their learning.

“They’re doing the thinking, the explaining, the speaking,” said Christina Masciotti, a math curriculum developer for CUNY Start, in a presentation with Maria Cormier of CCRC and Mike Weiss of MDRC.

An MDRC and CCRC project on CUNY Start is looking at the program’s implementation and effects, using a random-assignment research design to compare outcomes for developmental education students offered CUNY Start versus traditional remediation. Early results are intriguing: In just one semester, the percentage of students given access to CUNY Start who were considered college-ready in math increased from 5.4 percent to 57 percent. For the students assigned to traditional developmental education, 24.1 percent were college-ready at the end of the semester, up from 5.8 percent at the start.

“We’ve never seen an impact that large in terms of getting students college-ready in one semester,” Weiss said. However, because the program delays their start in college, CUNY Start students earn fewer college credits than students in the control group in their first semester.

The implementation research points to several potential explanations for the dramatic difference in outcomes, Cormier said, including major differences in the instructional approaches, supported by the intensive professional development for CUNY Start instructors.

“In order to see those changes in the classroom, you have to invest in the teachers,” Cormier said.

Successful CUNY Start students can move into CUNY’s Accelerated Study in Associate Programs (ASAP), which offers many of the same wraparound supports but is designed for students with fewer developmental needs.

“The beating heart and soul of ASAP is our comprehensive support services,” said Donna Linderman, CUNY’s associate vice chancellor for academic affairs, in a League conference session on ASAP. To test whether ASAP can succeed at scale, the program is now being rolled out to all eligible students at Bronx Community College.

Berkeley City College, one of the schools in the study, cut its levels of English language learner courses from six to four and added college-level content into all course levels. Students in the courses are now required to write the same type of research paper assigned in other composition courses.

“You’re being treated as a college student who is also learning a foreign language,” said Gabriel Winer, a professor at Berkeley City College.

Two other CCRC projects presented at League emphasize the role of faculty in ensuring reforms reach the classroom and affect student learning. One is examining the adoption of a successful K-12 model of professional development at community colleges. Using the Lesson Study model, developmental math professors in Oregon are working together to develop and refine lessons that incorporate new teaching methods.

“We’re trying to get our students to engage in math in their everyday lives with confidence,” said Laura Smoyer, an instructor at Portland Community College.

The other CCRC project in this area is examining models for improving professional development for adjunct faculty and involving them in broader reform efforts. Around 70 percent of instructors at community colleges are part timers.

“It is really impossible to have a conversation about enhancing teaching and learning without talking to part-time faculty,” said Florence Xiaotao Ran, a postdoctoral research associate at CCRC.